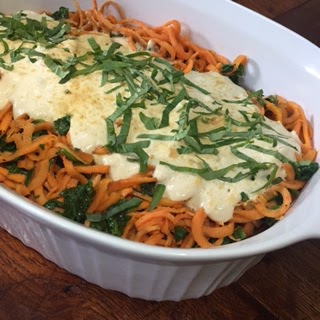 I love when my clients challenge me to step outside of my comfort zone in the kitchen. As a personal chef, it is my duty to adapt to the dietary needs and wants of my clients. During any given week, I will cook vegan one day, paleo the next and a little gluten and dairy-free sprinkled in between. In my personal life, I am none of those things. My own food philosophy leans more towards a "flexitarian" approach to food; that is 80% plant based, 20% animal protein. I like real, whole foods and have never found myself searching for a pasta, or dairy alternatives. I will eat most anything, but strongly believe in moderation and portion control. With that being said, I had to chuckle, when I realized that this vegan sweet potato "noodle" dish was probably on of the most favorite things that I had prepared this week.

So let me just say, I would not eat this as a substitute for for a bowl of spaghetti and meatballs, but I would prepare and eat it, because it is REALLY GOOD, in its own right. This recipe does require some special equipment, a spirilizer and a high-powered blender, such as a Vitamix, are a must in order to achieve optimal results. I love the spirilizer and have enjoyed experimenting with various types of veggie noodles. For spirilzing sweet potatoes, skinnier potatoes seem to work the best, also cutting the potato in half makes it more manageable. Now, I am no expert on blenders, in fact, I have not owned a blender, since I received one for a wedding gift, twenty years ago. I used it once; it broke; I threw it in the trash! I have never found the need for a blender, because I don't enjoy the things you typically make in a blender, like frozen cocktails, milkshakes and smoothies. I have been perfectly content with my immersion blender for years, because it makes things that I do like, such as, creamy soups and savory sauces. Luckily my client had a Vitamix in her kitchen, which worked like a charm for this recipe.

There are plenty of cashew cream recipes on the internet, which I referenced to help me get started with the liquid to nut ratio. With experimentation, I settled on 2 cups of soaked cashews to 2 cups of liquid. I used almond milk and vegetable stock. This produced a creamy, rich and pourable sauce base. Fresh garlic, salt, white pepper, lemon zest, nutritional yeast, and organic onion granules rounded out the flavor.

Another point of humor for me in this recipe is the nutritional yeast. I was first introduced to this ingredient about five years ago, during a class I assisted at the Chapman Family Cancer Wellness Center at Piedmont Hospital. Nutritional yeast was presented as a substitute for parmesan cheese. Needless to say, I was completely appalled by this notion! Nothing, I mean NOTHING, could possibly be a substitute for real Parmigiano-Reggiano, one of the worlds finest and cherished ingredients. I immediately disregarded nutritional yeast and did not think of it again, until years later, when it appeared as a garnish on a potato dish that I ate in a restaurant. What was this savory powder on my roasted potatoes? I loved it! I asked the server what it was, and when he confirmed that it was nutritional yeast, I smiled. I suppose the presentation and context of an ingredient are key. As a substitute for parmesan, I was not interested, yet when presented in its own right as a garnish, I was hooked. Mind games, I tell you!

This recipe is a prefect summary of many things that I thought I did not like or support over the years, but certainly shows that with time, experimentation and an open mind, one can broaden your horizons and palate. So whether vegan sauces and veggie noodles are your norm or your nemesis, I encourage you to get in to the kitchen and try something new, and as always, make every plate something to be passionate about!